Why all the God-talk? 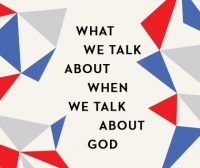 The idea of God has always loomed large in my life and continues to play a prominent role in my conversation with others.  But what if someone doesn’t believe in God or feels uneasy about the idea?  The questions naturally arise:  Why all the God-talk?  On what basis is it justified?  Those are fair questions, to be sure, and it seems to me that there are two ways to address them:

With these things in mind, I offer the following bulleted items as a provisional point of departure for more fruitful conversations between “believers” and “unbelievers” (of various kinds) and, more specifically, between “theists” and “atheists”:

From this point of departure, then– that of God, Consciousness, & Cosmos –let us explore reality together, becoming more fully aware of the intelligible relationships that obtain at every level of experience.   As we do this, it seems to me that references to God are justified (at least in part) by our persistent ideal of Truth–but also insofar as we distinguish the cause IN appearances (i.e particular causes or or sets of causal relationships that obtain within the world of our experience) from the cause OF appearances (i.e. the mysterious source or ground of existence, as such–including the consciousness in which and by virtue of which the cosmos  appears). [cf. Kant’s discussion of the antinomies of reason in his Prolegomena to any Future Metaphysic.]  The former– i.e. the causal relationships that obtain within the world of our experience –is the ever expanding domain of science.  In contrast, the latter– the mysterious source or ground of existence, as such –seems always to elude our conceptual grasp and remains strangely unaffected by our rapidly accumulating knowledge of the apparent world.  As such, it is understandable that the skeptic may be inclined to assign to the latter a merely logical and pedagogical function–to think of it as a mere “placeholder” for an inaccessible and ever-receding ideal of human knowledge which nevertheless inspires us and leads us on.  Nonetheless, the skeptical point of view cannot rule out the possibility that this imagined 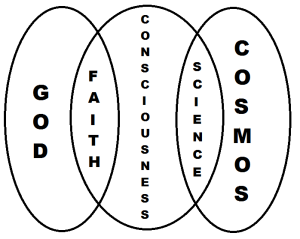 first cause (as it is sometimes called) is not just an ideal–but that it may also be our final cause, as well; an ideal that is in Truth accessible through some species of spiritual insight, intuition, or realization that is fundamentally  pre-conceptual or supra-conceptual (or nondual ).  And this kind of insight (or intuition or realization), it may be argued, is the domain of faith.

While the domain of faith is often contrasted with the domain of science, it may be that Consciousness holds the key to both domains.  For as we contemplate of the apparent dichotomy between the source or ground of existence and its various manifestations, it seems impossible to place consciousness firmly on one side or the other.  On the one hand, all modifications of our individual states of consciousness (i.e. our “mind”) seem to happen in parallel with corresponding changes in our neurophysiology.  As such, it is not implausible to think of the latter as causing the former.  On the other hand, it seems impossible to imagine how more and more complex combinations of inert “matter” can eventually give rise to “sentience” (and then to “perception” and ultimately to “reason”), so it seems just as plausible– if not more so –to associate consciousness with the unknown source or ground of appearances (rather than attributing it to material processes, per se).  But whatever our take on these things, it would seem that there is plenty of room for humility–plenty of room to find common ground –as we continue to explore reality together.  Questions that remain to be considered are:

1. The positive function of religion and its limitations.

2. The positive function of science and its limitations.

3 Responses to Why all the God-talk?