Meditations on the Tarot

It has been an unexpected joy for me– this (past) spring and summer –to delve into the history, mystery, and lore surrounding Tarot cards.  My focus has been on their psychological significance, in a Jungian sense– and on their philosophical and theological significance –not on their popular employment as a means of divination.  When it comes to fortune telling, I’m like Aunt Sybil in Charles Williams’, The Greater Trumps.  The sentiments that I have in mind are expressed in the following  exchange between Sybil, her niece Nancy, and Nancy’s boyfriend, Henry:

“What did you mean about fortune-telling?” [Nancy] said, addressing ostensibly Mr. Lee, but in fact Henry. Both of them came jerkily back to consciousness of her. But the old man was past speech; he could only look at his grandson. For a moment Henry didn’t seem to know what to say. But Nancy’s eager and devoted eyes were full on him, and something natural in him responded. “Why, yes,” he said, “it’s here that fortunes can be told. If your father will let us use his pack of cards?” He looked inquiringly across. Mr. Coningsby’s earlier suspicion poked up again, but he hesitated to refuse. “O, if you choose,” he said. “I’m afraid you’ll find nothing in it, but do as you like. Get them, Nancy; they’re in my bag.” […] “Right,” said Nancy […] She found the Tarot pack and ran back again […] “Who’ll try first?” she went on, holding out the Tarots. “Father? Aunt? Or will you, Mr. Lee?” Aaron waved them on. “No, no,” he said hurriedly. “Pray one of you–they’re yours. Do try–one of you.” “Not for me, thank you.  I’ve no wish to be amused so–” Her father hesitated for an adverb, and Sybil also with a gesture put them by. “O, aunt, do!” Nancy said, feeling that if her aunt was in it things would be safer. “Really, Nancy. I’d rather not–if you don’t mind,” Sybil said, apologetic, but determined. “It’s–it’s so much like making someone tell you a secret.” “What someone?” Henry said, anger still in his voice. “I don’t mean someone exactly,” Sybil said, “but things…the universe, so to speak.  If it’s gone to all this trouble to keep the next minute quiet, it seems rude to force its confidence.  Do forgive me.”  She did not, Nancy noticed, add, as she sometimes did, that it was probably silly of her. Nancy frowned at the cards. “Don’t you think we ought to?” she asked. “Of course, if you can,” Sybil answered. “It’s just–do excuse me–that I can’t.” “You sound”, Henry said, recovering a more normal voice, “on remarkably intimate terms with the universe.  Mayn’t it cheat you? Supposing it had something unpleasant waiting for you?” “But,” said Sybil, “as somebody says in Dickens, ‘It hasn’t, you know, so we won’t suppose it.’ Traddles, of course. I’m forgetting Dickens; I must read him again. Well, Nancy, it’s between you and Henry.”

Likewise– while  I am not suggesting that anyone else should feel the way Aunt Sybil and I do about fortune telling –I want to make clear to others who do feel that way that I know where they are coming from.  But it is also worth noting that Charles Williams, J.R.R. Tolkien, and C.S. Lewis were friends and fellow inklings.  As such, those of us who (like Charles Williams) find ourselves nonetheless fascinated by these cards are not necessarily (or for that reason alone) in bad company.  One may well ask, however,

If you aren’t interested in divining the future, what is your fascination with Tarot cards?

As it happened, my interest sprouted almost immediately– and began to blossom very quickly  and unexpectedly –when a friend handed me Meditations on the Tarot: A Journey Into Christian Hermeticism, by Valentin Tomberg. 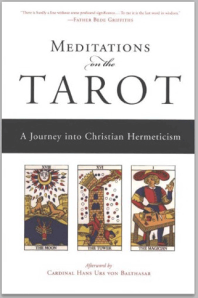 This amazing book is written in the form of 22 letters– addressed to the unknown friend –with each letter pertaining to one of the 22 Major Arcana or Trumps of the Tarot.  Each letter is a sustained meditation on a particular card, relating it to the teachings of the western, Catholic tradition, to the so-called Hermetic tradition, and to other religious and quasi-religious philosophies from a variety of cultures and epochs.  Moreover, most of the letters also refer to several of the other letters, at least in passing (and to their corresponding Trumps), creating a very dense network of interlocking symbols and multifarious modes of discourse  which is extremely difficult to summarize, but which– in conjunction with a contemplation of the Trumps themselves –tends to captivate the imagination and open the heart in a way that has, for me, been truly extraordinary.   I say this in spite of the fact that I have not been reading it uncritically.  At some point, perhaps, I will write a sympathetic critique in which I will address, among other things, what are, in my opinion:

These criticisms notwithstanding, it is– in contrast to Our Sunday School Theology —a breath of fresh air.  And even if it is not (in my opinion) completely fair in its presentation of other philosophies and religions, it at least attempts to represent them as having a share in the truth which, from its own point of view, both antedates and ultimately finds fulfillment in the Catholic faith. But over and above this, the author seems to appreciate– fully and without reservation –that faith is not merely a matter of believing in sacred texts, religious dogma, or some imagined series of historical or prophetic events, but entails entering into the One life Divine, here and now.  And, my brief but pointed criticisms notwithstanding, his treatment of other faiths and other philosophies is, it seems to me, fair enough and comprehensive enough to build a bridge that can allow traffic to pass both ways (i.e. into or out of the Roman Catholic Church for which he is an apologist).  Indeed, with respect to the Hermetic tradition, this highly recommended website quotes him as follows:

In May 1967 the author wrote to some friends: “My meditations on the Tarot are no scientific undertaking. Rather, they are a wide-ranging effort, by means of the symbolism of the Hermetic tradition, to enter again deeply into the all-encompassing stream of the Catholic tradition, so through a shift in perspective, through a purifying atonement, the Catholic and the Hermetic traditions might be seen as one, in harmony with each other” (EnglishWordPlay.Com).

So, if one is willing to roll with the punches– to go along and get along so to speak –this book is, on balance, rather ecumenical and inclusive.  In fact, I think it could, with sufficient nuance on the part of the instructor (and in conjunction with other texts offering alternative and supplemental points of view), be used in a college level course in comparative philosophy and/or religion. Rather than struggling to summarize the content of this extraordinary book in this brief review, I recommend that anyone who is so inclined follow the link below to a beautiful summary presentation (of several of the Letters) complements of BBC Radio Drama Producer, Shaun Macloughlin:

http://www.englishwordplay.com/tarot.html English Wordplay ~ Listen and Enjoy Meditations on the TAROT

And, for additional online resources, see my new blog which, among other things, is designed to pull together as much quality content as possible from around the web pertaining to this text:

In the process of reading these 650+ pages, I decided to purchase a deck of Tarot cards and became increasingly fascinated by the Major Arcana as I continued to work my way through the text.  Later, I decided to print my own deck of Teeny Tiny Tarot Trumps and also secured copies of the following:

The Symbolism of the Tarot, by P.D. Ouspensky

The Greater Trumps, by Charles Williams (a novel)

The Fools Pilgrimage: A Kabbalistic Meditation on the Tarot, by Stephan A. Hoeller

In the process of exploring this material, I also found something very much akin to my own default philosophical position echoed in the writing of P.D Ouspensky, via Cynthia Giles.  The image, at the bottom, is based on this quotation: 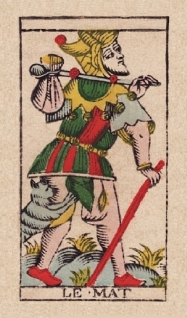 “If we imagine twenty-one [numbered Tarot Trumps] disposed in the shape of a triangle, seven cards on each side, a point in the centre of the triangle represented by the zero card, and a square round the triangle (the square consisting of fifty-six cards, fourteen on each side), we shall have a representation of the relation between God, Man and the Universe, or the relation between the world of ideas, the consciousness of man and the physical world. The triangle is God (the Trinity) or the world of ideas, or the noumenal world. The point is man’s soul. The square is the visible, physical or phenomenal world. Potentially, the point is equal to the square, which means that all the visible world is contained in man’s consciousness, is created in man’s soul. And the soul itself is a point having no dimension in the world of the spirit, symbolized by the triangle. It is clear that such an idea could not have originated with ignorant people and clear also that the Tarot is something more than a pack of playing or fortune-telling cards.” ~ D.P. Ouspensky, “THE SYMBOLISM OF THE TAROT”

Making suitable allowance for the context– and keeping in mind (as Donald Tyson point out) that the fool was originally an unnumbered card and that, later, it was numbered “0” (zero) by occultists and esoteric philosophers –I think Ouspensky’s formulation articulates very well (in the imaginal context of the Tarot) my own implicit idealism (derived from my admittedly idiosyncratic  reading of Kant and Spinoza) which I sometimes refer to (only half jokingly) as Trinitarian panentheism. Here, in conclusion, is Ouspensky’s formulation as represented by Cythia Giles: