As I said last summer with regard to Jeff Benner’s Ancient Hebrew Resource Center, every now and then I stumble onto a website that presents what seems to me– rightly or wrongly — a vast quantity of extremely valuable information in a relatively easily intuitable form.  I then become extraordinarily enthused with the material and want to share my enthusiasm with as many people as possible.  This happened again yesterday when I discovered John Uebersax’s Home Page.  Here’s how it all unfolded:

As I was discussing Plotinus with a friend, via email, I was trying to remember the word procession, but could not, at first come up with it.  So I decided to google the phrase: “another word for emanation in Plotinus”.  I don’t think that’s how I finally came up with the word procession— I think I finally just remembered it –but in the process of looking for it, I happened to open up this article on Plotinus and noticed this sentence:

” Plotinus’ doctrine that the soul is composed of a higher and a lower part — the higher part being unchangeable and divine (and aloof from the lower part, yet providing the lower part with life), while the lower part is the seat of the personality (and hence the passions and vices) — led him to neglect an ethics of the individual human being in favor of a mystical or soteric doctrine of the soul’s ascent to union with its higher part.”
http://www.iep.utm.edu/plotinus/

The word soteric then caught my attention (as in soteriology).  I wondered if there might be a relationship to the word esoteric, as well–might it be that the esoteric offers us the safety of the inner circle?  In any event, I then decided to do a search for soteric and found this:

“Soteria is what we would today call the self-actualizing principle, a beneficent force that guides our development, helping us to reach the desired end of psychological salvation, integration and happiness.”

[omitting some discussion of the middle Platonists and Philo]

“In Christianity, the figure of Christ personifies soteria.  As Christ is understood as teacher, healer, redeemer, Good Shepherd, helmsman etc. of the soul, so all these attributes apply to the soteric principle.”

My years of working for an Internet access provider (1994-1999)– and years of futzing around with my own web pages –has made me curious to explore websites beyond the first page that I happen to land on, but not merely by following the links that are obvious.  Rather, what I often do is simply work my way up the “directory tree” toward the root directory–amazing what you find sometimes:

That brought me to this page:

Since both nous and anamnesis had been on my mind recently, I looked at each of them and was pleased and intrigued, to say the least.  So I then clicked on the last entry– words.htm –and found a discussion of The Prisca Theologia  [which is “the conjecture that there was in ancient times a pure or ‘pristine’ religion (prisca theologia), uncontaminated by modernism”].  This is also related to the idea of traditionalism (e.g. Guenon and Schuon, et al) and, more broadly, the perennial philosophy.   I was also pleased to find Peter Kingsley  mentioned on that page.

Moving on up the “tree” of this directory brings us to:

WORKS on PSYCHOLOGY, RELIGION and SOCIETY

Wow–it looks as if one could get quite an education exploring this one little nook and cranny of the web by itself, eh?  I clicked on the Platonism section and noticed (among many other interesting items) the following:

Islamic Platonists and Neoplatonists:  This page lists some important Islamic philosophers, theologians, and writers influenced by Platonism and Neoplatonism (and, in some cases, Neopythagoreanism). The purpose is to help demonstrate the extent of continuity between Christian and Islamic philosophy, which are both very strongly influenced by the Greek philosophical tradition.
http://www.john-uebersax.com/plato/ip.htm

And there is also a page on The Divided Line.  He writes:

After the Bible, it’s hard to find anything in Western literature that contains so much in so short a passage as Plato’s Divided Line Analogy, which appears at the end of Book 6 of the Republic (Rep 6.509d – 6.511e).

The full text, from public domain translation of Benjamin Jowett (1892), is supplied below.
http://www.john-uebersax.com/plato/plato1.htm

Elsewhere, I found links to pages on Christian Gnosis and Cultural Psychology — both of these are must see links, IMO. 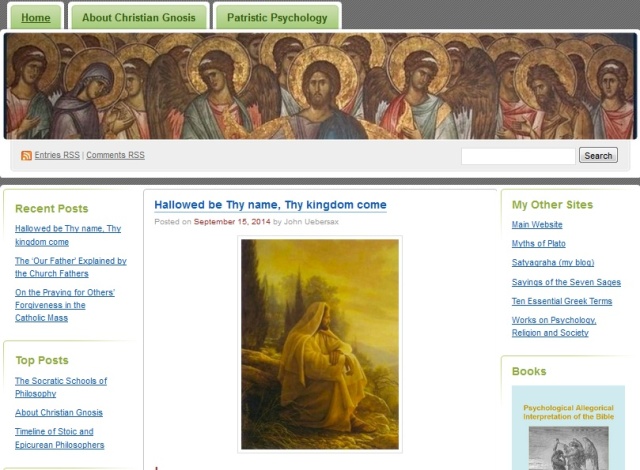 Finally, I decided to read through the aforementioned page on The Divided Line and that led me to this wonderful piece:

The Pathology of American Thinking: How Plato Might Have Helped Us Avoid an Iraq Debacle
“This short article will explain how Plato’s division of human knowledge into four kinds relates to the disordered thinking–public and governmental–that led to America’s Iraq problem.”
http://www.john-uebersax.com/plato/eikasia.htm

Many thanks to John Uebersax for sharing the fruits of his labors over all these years!  Keep up the good work, John! 🙂