Getting to Know Gnosticism 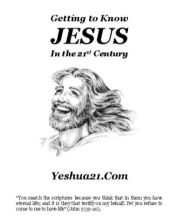 Note:  This “post” is part of a longer essay which has been posted as a separate “page” under the Nonduality menu:  Gnosticism:  The Good, the Bad, and the Ugly–which  is, in part, a response to those who from time to time have suggested that the Yeshua21 Blog is promoting a gnostic message.  While I initially intended to go into some detail about the history of that blog and the teachings shared therein, I found that by doing so, the piece grew exceedingly long and rather top-heavy.  As such, it has seemed best to make it into two separate posts–this one, on gnosticism proper; and then, a separate piece– entitled To Know OR Not to Know? —which provides a bit of the back-story.  This piece picks up where that one leaves off.

To begin with, it is worth noting that many people– following the lead of Michael Allen Williams, perhaps, and Karen King –are beginning to argue that the terms gnostic and gnosticism are so broad as to be almost meaningless.   A case in point is this suggestion by Cynthia Bourgeault:

“First of all, I would call for a moratorium on the use of the term
‘Gnosticism.’  It carries so many connotations, most of them negative and hugely inaccurate, that it sheds far more heat than light. . . . Second, we need to deprogram the negative imprinting and begin to encounter these texts again on their own terms, with accurate translations and empathetic understanding. . . . Finally, we need to stop thinking about these texts as uniform — as if they all espouse a single philosophy or “Gnostic” point of view.  They span several centuries, and like the canonical gospels themselves, they reflect a variety of viewpoints and levels of spiritual understanding” (Lecture on Gnosis and Gnosticism, April 2010 — See also The Meaning of Mary Magdalene).

“Why is it so hard to define Gnosticism? The problem, I argue, is that a rhetorical term has been confused with a historical entity.” —Karen L. King,  “What Is Gnosticism?”

That rings true, insofar as my critics were playing the gnostic card in a purely rhetorical way which allowed them to dismiss my point of view (with extreme prejudice, as it were), but without any real, serious discussion–much less any real meeting of the minds.

Nevertheless, it seems to me that since both Christian and non-Christian authors of antiquity wrote treatises in opposition to “the Gnostics” (e.g. Irenaeus, Plotinus, et al) — and since, moreover, there are no shortage of modern folk who continue to identify themselves as gnostic or Gnostics (see Gnosticism in modern times) — it looks as though Cynthia Bourgeault’s call for a moratorium is hardly realistic.  As such, it seems to me that we would all do well to do a modicum of research on the topic and to begin using these terms with considerably more care.  Below are some of the fruits of my own research in this regard.

Gnosticism:  The Good, the Bad, and the Ugly

For my part– and without claiming any significant expertise of a scholarly sort  –I seem to discern three types of gnosticism (or better, perhaps, three aspects or facets of gnostic life and thought) which I will personally and provisionally designate as follows: 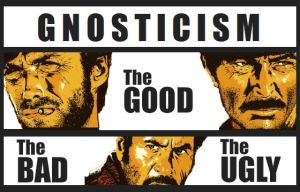 These are not by any means mutually exclusive– quite the contrary –but seem to be found in a variety of combinations which may emphasize any one or two of these facets to the exclusion or marginalization of the other(s).  Nevertheless, it seems to me that the primary reason for the push-back against gnosticism in the early church– and the primary reason for viewing it with suspicion today –has more to do with numbers 2 and 3 (beliefs and lifestyles) rather than the unitive or nondual element which is, in many respects, merely implicit in the (so-called) gnostic texts (as it is in our canonical scriptures, as well, only more so).  Thus, rank and file Gnostics may be (or may have been) very enthusiastic about 2 and 3 without really experiencing the cutting insight of number 1 (just as fundamentalist Christians may be very enthusiastic in a purely egocentric way about their “Christian worldview” and “Christian values” without, in fact, knowing the mind of Christ and the power of the Spirit).

In light of this, if my Christian vision is to be accurately designated as gnostic, it can only be by virtue of its emphasis on unitive insight or nondual awareness (since it bears no relationship whatsoever to numbers 2 and 3).  Nevertheless, by characterizing my mode of discourse as gnostic, these aforementioned critics– who seem hardly to have a clue about any of this –managed (intentionally or unintentionally)  to associate what I have to say with a whole history anti-gnostic thought and sentiment that was not at all directed to the kind of seeing and knowing that I am attempting to share, but rather (or at least primarily) toward those metaphysical teachings and licentious sexual practices of the so-called Gnostics of antiquity that clearly conflicted with the dominant Christian culture of that era and continue to do so today.  As such– in order to clarify all the issues at stake and lay the ground work for fair and honest discussion in which we can compare apples to apples and oranges to oranges –I want to present a brief overview of all three facets of gnostic thought and culture, but in a slightly different order–beginning with the bad, continuing with the ugly, and concluding with, as I see it, the good.

NOTE:  As indicated above, these value judgments reflect, in part, what I take to be the perspective of the dominant Christian culture from the beginning.  I do not mean to suggest that anyone who is honestly convinced that the truth is to be found in what I am referring to as bad or ugly gnosticism should not pursue these, but I do want to distance myself from both those positions and create a safe-space for what I take to be the good gnosticism of unitive or nondual awareness.  This, in my opinion, offers a viable way forward for those who are sincerely seeking the Way, the Truth, and the Life in the 21st century–a way forward in which traditional Christian teachings become, again, both living and intelligible.

This entry was posted in Christian Vision, Nonduality. Bookmark the permalink.