The Call of Conscience

[Note:  This is one of several articles that I am archiving here as I phase out an old website, The Four Precepts Web Portal & Spiritual Search Page.  While these articles reflect a formative period in my life and thought, they do not necessarily reflect my current opinions.]

Immanual Kant teaches us that there is nothing good without qualification but a good will. And a good will, he explains, belongs to those who are autonomous, obeying the law that the self gives to itself—a law that is intrinsic to all rational creatures. 1  Later, Martin Heidegger rethinks these same basic notions in his phenomenological descriptions of authenticity and the call of conscience in Being and Time. 2 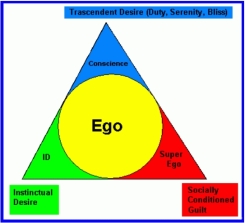 Both of these thinkers reject the notion that conscience is merely a socially conditioned sense of guilt generated by particular human communities. While both would no doubt acknowledge the reality of Freud’s super ego as one element of our moral and emotional landscape, neither would accept this as a legitimate account of the call of conscience, per se. The latter, it seems, has an origin that transcends the empirical world and has implications that transcend the merely relative concerns of our material existence. Whereas our super ego reflects the expectations of society, the call of conscience reminds us of that which is Absolute—that which is of ultimate concern. 3

Regardless of the details, skeptics have little patience for such notions of conscience—much less the idea of the Absolute. They are perpetually vigilant lest some confederacy of self-satisfied prigs attempt to impose their will on everyone else by dressing up their particular desires in the garb of the universal and presenting them to the public as the dictates morality. This is not an unreasonable fear and a healthy skepticism is, perhaps, an appropriate response to most moralistic rhetoric. What is so beautifully elegant about the general notion of conscience that we derive from Kant and Heidegger, however, is the fundamental element of autonomy. Because we distinguish between the call of conscience (which we associate with our Divine Essence) and socially conditioned guilt (which we associate with our super ego), we must acknowledge that one person cannot ultimately judge whether or not another person is following the call of conscience. All we can ask of people is that they listen up—stressing, at this point, that there is a relationship which gives life meaning and purpose and a call that ought not be ignored. We are certainly free to disparage the possibility of such a relationship and we are free to simply ignore the call, but it is our choice— our intention —that ultimately determines the phenomena and not vice-versa.

If we abstract from the top of the first diagram, above, all we are left with is the tension between our own instinctual desires and the desires and expectations of others which we have, to some degree, internalized. The dynamics of this tension is aptly described by Freud as Civilization and its Discontents and by Nietzsche as The Will to Power. Both Freud and Nietzsche have radically called into question the perspective illustrated by the first diagram. But even if its reality cannot be demonstrated to those who refuse to listen to reason, it remains a viable option to people of good will. The first diagram illustrates the perspective of faith while the second diagram illustrates the perspective of despair. The choice is always ours.

1. For more on Kant’s moral philosohpy, see The Wikipedia, The Philosophy Pages, and Kant’s Groundwork of the Metaphysics of Morals. [Return]

2. Some relevant excerpts from Being and Time can be found on here: Download PDF).  [Return]